Develop a Successful Enterprise That Works Without You

Develop a Successful Enterprise That Works Without You.

How would you like your business to be a commercial, profitable enterprise that works without you? This may sound like the business version of the Holy Grail, but is actually quite achievable if you develop the appropriate systems. While creating business systems seems very complicated to most business owners, it is actually quite easy. To illustrate, I will reintroduce you to Joe from Joe’s plumbing who I used in last September’s article to illustrate the AIDA advertising principle. After focusing on: lead generation, lead conversion; number of transactions; average dollar sales and profit margin, Joe rapidly grew his business. He then wanted to spend more of his time working on his business and was ready to turn over the day-to-day responsibilities to his lead foreman. To do this, Joe realized that he needed to develop systems.

Next, Joe developed flow charts for each functional area of his business. These flow charts accurately described in detail exactly what happened in each area. The example shows how plumbing orders flowed through Joe’s business. To ensure complete buy-in, Joe involved his entire team. He then asked his team to flow chart all functions and processes in his business.

Once Joe knew exactly how the work flowed, he needed to understand and document each part of the process as it flowed from one functional area to the next. While he was tempted to quickly work through this area, he knew he must take the time to do it right. Joe evaluated the different methods to document the process including: interviewing the team members, asking them to write a report, videotaping them and audio taping the team members. Joe decided on interviews so that he could better understand what each person did. Once Joe had a detailed description of what each team member did, he gave a copy to every member for their review, buy-in and commitment.

Now that Joe had a baseline, he could start the process of continuous improvement. A popular manufacturing process is called lean manufacturing. The process was developed by Toyota back in the 1950s when their senior executives came to America to study our mass production system for automobiles. They happened to stop at a supermarket and having never seeing anything like this in Japan, were amazed at this approach. When they returned to Japan, the executives combined what they had discovered in the supermarket with what the had learned from the American automobile manufacturing model and came up with a revolutionary approach that has brought us just-in-time inventory, lean manufacturing and many other manufacturing approaches. The heart of the system is Kaisen, the Japanese word for constant and never ending improvement. When you make a significant improvement you celebrate, raise the bar and go for the next level.

Joe decided to implement the lean principles. He started by testing and measuring each job one at a time by comparing the performance to the Key Performance Indicators for each job. The idea behind this was not to catch the team members doing something wrong, but rather to look for areas with the greatest opportunity for improvement. So he involved his team members and asked them to list: 1) their top ten time consuming tasks, 2) their top ten most stressful tasks, 3) their top ten productivity related tasks and 4) the top ten tasks that bring them the most happiness. Joe and his team then set out to look for the most critical bottlenecks and identify which tasks could be streamlined to help the work flow more efficiently and deliver his service more effectively to increasingly delight his customers.

Joe focused on the four key areas for systemizing any business: People and Education, Delivery and Distribution, Testing and Measuring and Systems and Technology. By concentrating on these four areas, Joe developed the most efficient and effective plumbing business in his area, satisfied more customers and most importantly, created a commercial, profitable enterprise that worked without him. 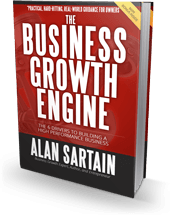